The 2020 Space Resiliency Summit encourages members of the DoD, Intelligence Community, industry, and academia to discuss initiatives aimed at maintaining US superiority in the space domain. This year’s summit will examine the policies and strategies required to enhance the U.S’ supremacy of the space domain. Speakers will address the need for a robust proliferated space architecture, increased cybersecurity, accurate missile detection capabilities, and sophisticated payloads. Discussions will also center on the progress of the realignment of US Space Force, US Space Command, and the US Space Enterprise.

[To access the live broadcast please, click the LIVE BROADCAST SITE BUTTON. If you are a registered attendee and need assistance with your login credentials, please email Nick Liberato-Randall at nliberatorandall@dsigroup.org. Registration is not open to new attendees. All attendees who registered after 11/29 will receive login credentials before 4pm EST Tuesday, Dec 1st.]

Shawn Barnes, SES
Deputy Principal Assistant to the Secretary of the Air Force for Space

Why You Should Attend This Summit:

The 7th Annual Space Resiliency Summit is an educational summit that will convene senior intelligence officials, government leaders, academia, and solution providers to discuss the developing technology, infrastructure, and policies surrounding the role of space in the United States’ national security enterprise.

As barriers to entry continue to fall, the space domain is becoming an increasingly contested operating environment. US intelligence, defense, and commercial organizations actively leverage space capabilities for communications, scientific pursuits, intelligence, reconnaissance, and missile detection efforts. Compromising these assets will potentially have tremendous consequences on national security as well as the wellbeing of the nation.

Currently, adversaries such as Russia and China are developing measures to deny our ability to operate in Space though cyber and kinetic means. Even though Russia was first to develop space capabilities China has greatly increased its investment over the past few years and is now the main threat to US systems. They continue to develop anti-satellite weapons that pose a threat to not only US assets but pose a risk to creating vast amounts of space debris that could damage any number of commercial satellites.

The Space Resiliency Summit will examine the policies and strategies required to enhance the U.S. supremacy of the space domain. Speakers will address the need for a robust proliferated space architecture, increased cybersecurity, accurate missile detection capabilities, and sophisticated payloads. Discussions will also center on the progress of the realignment of US Space Force, US Space Command, and the US Space Enterprise.

DSI’s team specializes in the extensive research and development of our Summit’s content and focus areas. We assemble the most respected minds across the Space community, as well as key policymakers across military and civilian offices. Our non-partisan approach allows us to reach across all services and agencies to bring together a truly holistic group of decision-makers and solution providers.

Topics to be covered at the 2020 Summit:

- Developing US Space Strategy in an Era of Great Power Competition

- Maintaining and Enhancing the US Competitive Edge in Space

- Effectively Addressing the Challenges of a Contested and Congested Space Environment

- Encouraging and Promoting Commercial Space Launches to Advance US Interests

At our Symposium You Have the Ability To: 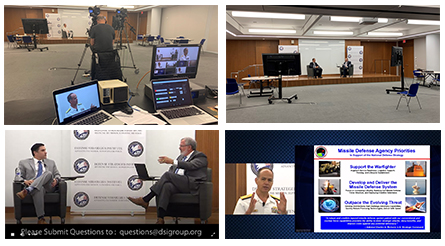 - DSI’s Summit directly supports DoD, IC, and Government priorities by providing a conduit for officials to efficiently reach audiences outside of their respective offices that directly impact their department's mission success in an efficient expenditure of time.

- DSI’s Summit will provide a forum to address and improve internal and external initiatives, meet with and hear from partner organizations, disseminate vital capability requirements to industry, increase visibility within the larger community, and generally support their mission.

- The Summit is open to all DoD and Federal employees and is considered an educational training forum.

(Industry and academia members are charged a fee for admission)

*Summit is CLOSED TO PRESS / NO RECORDINGS*